Extract from “My Digital Footprint” from Chapter 5

To reiterate the previous argument, the idea of MY DIGITAL FOOTPRINT extends the idea of raw data to the wider concept of capture, store, analysis and value created from data generated through digital engagement. This process is based on a structured approach incorporating inputs and outputs, and a feedback loop that governs the whole process. This feedback loop progressively enriches and refines the outputs (value) over time. The analysis phase is able to take raw data from various sources (which I refer to as the digital footprint) and generate value in the form of services, such as personalisation, reputation or discovery – the output from the analysis process I call ‘behavioural DNA’. The value derived from the process is MY DIGITAL FOOTPRINT.

There are two central ideas which underpin this book (and this section): the feedback loop which enriches the digital footprint and the role of the mobile device in enriching the value from MY DIGITAL FOOTPRINT.

The Nobel Prize winner with a poor reputation

Let us first understand the difference between identity and reputation from an imaginary anecdote.

Many social network sites depend on explicit reputation mechanisms. These can be implemented in many ways, such as the members rating each other ‘good’ or providing testimonials. However, such explicit recommendations have limitations and can be ‘gamed’. We illustrate the drawbacks of explicit reputation by considering the problem of the ‘Nobel Prize winner with a poor reputation’.

If a person’s ‘reputation’ depends on updating someone’s site (or depends on my friends updating the site) then it could mean: if I win the Nobel Prize (which presumably means I am the best in my field), but I forget to update that site, then my reputation is low, irrespective of my achievements.

This is a simplistic example but it illustrates the concept. Reputation should be implicit and should be reflected by your actions (which in turn are automatically captured in transactions/data), in other words, reputation should be a by-product of activities on a network.

The above example illustrates the difference between identity and reputation – in that identity (a passport, an ID card or even the Nobel Prize) is explicitly conferred by an external body and is recognised within its jurisdiction. Reputation (or digital footprint) is a much softer concept with a different use case as presented in the earlier work. Identity is based on documents, such as a driving licence, bank details, social security, certificates, etc. The digital footprint on the other hand is captured in the forms of data streams such as click data, content data, my data and social data – generated both by the individual but also by the social context of that individual as per Figure 16. 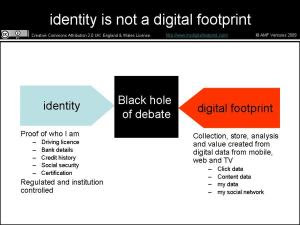