I participated in a fantastic talk in May 2022 on “Ideological Polarization and Extremism in the 21st Century” led by Jonathan Leader Maynard who is a Lecturer in International Politics at King's College London.  The purpose here focuses on a though I took from Jonathan's talk and his new book, “Ideology and Mass Killing: The Radicalized Security Politics of Genocides and Deadly Atrocities,” published by Oxford University Press.

When I started thinking about writing about Peak Paradox, it was driven by a desire to answer a core question I asked myself, individuals, boards and teams; “what are we/ you optimising for?” .  It has become my go-to question when I want to explore the complexity of decision making and team dynamics as the timeframe (tactical vs strategic) is determined by the person answering the question. Ultimately individuals in a team, which give the team its capabilities, are driven by different purposes and ideals, which means incentives work differently as each person optimises for different things in different ways in different time frames.

Nathalie Oestmann put up this post with the diagram below, talking about communication and all having the same message.  My comment was that if you want stability this is good thinking, if you need change it will be less so as it will build resistance.   If you want everyone to have the same message then again this is helpful thinking, but, if you need innovation alignment is less useful.  When we all optimise for one thing and do the same thing - what do we become?  A simple view is that 91 lines in the final idea becomes one as we will perpetuate the same, building higher walls with  confimative incentives, feedback loops and echo chambers to ensure that the same is defensible. 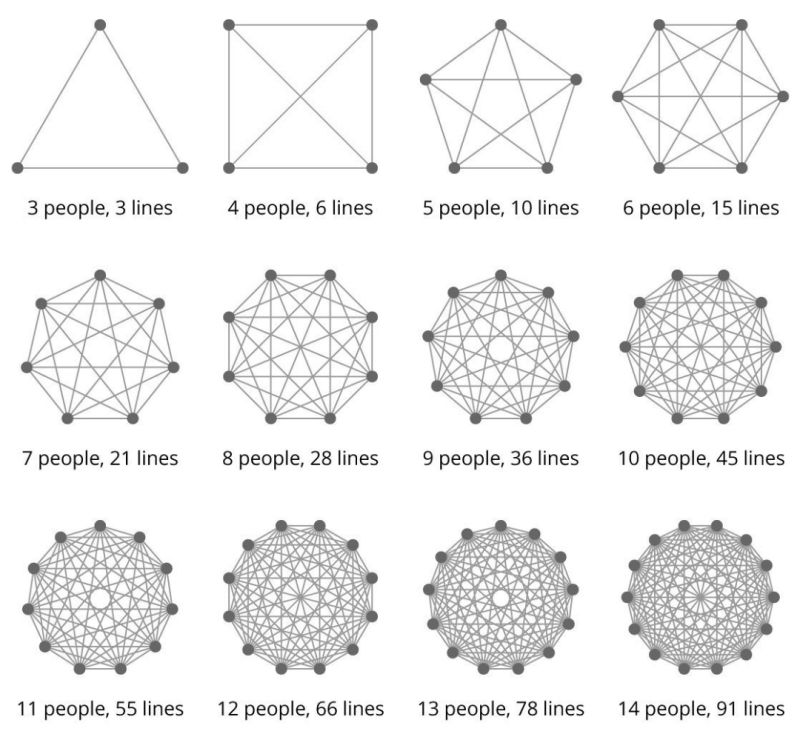 What we become, when we optimise for one thing was also set out by Jonathan in his talk. He effectively said (to me) that if you optimise for one thing, you are an extremist.  You have opted that this one thing is (or very few things are) more important than anything else.   We might *not* like to think of ourselves as extremists but it is in fact what we are when we optimise for a single goal.  Natalie’s post confirms that if you have enough people optimizing, for one thing, you have a tribe, movement, power, and voice.  The very action of limiting optimisation from many to single creates bias and framing.

Bill George wrote supporting the 24-hour rule from this INC article, essentially, whatever happens, is good or bad, you have 24 hours to celebrate or stew. Tomorrow, it’s a new day. It’s a good way to stay focused on the present.  The problem is that this optimising appears good at one level but to improve leadership decision making and judgement skills, moving on without much stewing or celebrating removes critical learning. Knowing when to use the 24-hour is perfect, to blanket apply is probably a less useful rule. Leadership needs to focus on tomorrow's issues based on yesterday's learning whilst ensuring surviving today, to get to tomorrow.

So much about what we love (embrase/ take one/ follow) boils ideas down to a single optimisation. Diets, games, books, movies, etc..  Is it that we find living with complexity and optimising for more than one thing difficult or exhausting, or that one thing is so easy that we given our energy retention preference there is a natural bias to simplification? Religion and faith, politics, science, maths, friends family and life in general however requires us to optimise for opposing ideas all the same time, creating tensions and compromises.

Implication to boards, leadership and management

For way-to-long, the mantra for the purpose of a business was to “maximise the wealth for the shareholders.”  This was the singular objective and optimisation of the board and instruction to management “maximise profits.”   We have come a little way since then, but as I have written before, the single purity of Jenson and Mecking's work in 1976 left a legacy of incentives and education to optimise for one thing ignoring other thinking such as Peter Drucker’s 1973 insight that the only valid purpose of a firm is to create a customer, which itself has problems.

We have shifted to “optimsing for stakeholders” but is that really a shift on the peak paradox framework or a dumbing down of one purpose, one idea, one vision?  A movement from the simple and singular to a nuanced paradoxical mess?  Yes it is a move from the purity of “shareholder primacy” but does it really engage in optimising for the other peaks on the map?  What does become evident is that when we move from the purity of maximising shareholder value is that decision making becomes more complex.  I am not convinced that optimising for all stakeholders really embraces the requirement for the optimising for sustainability, it is a washed out north star where we are likely to deliver neither.

Here is the issue for the leadership.

Optimising for one thing is about being extreme.  When we realise we are being extreme it is not a comfortable place to be and it naturally drives out creativity, innovation and change.

The pandemic made us focus on one issue, and it showed us that when we, irrespective of industry, geography and resources had to focus on just one thing we can make the amazing happen.  Often sited is the 10 years of progress in 10 months, especially in digital and changing work patterns.  However, we did not consider the tensions, compromises or unintended consequences, we just acted.  Doing one thing, and being able to do just one thing is extreme.

Extreme is at edges of the peak paradox model.  When we move from optimising for one thing to a few things we struggle to determine which is the priority. This is the journey from the the edges to the centre of the peak paradox model.  When we have to optimise for many things we are at Peak Paradox. We know that optimising for many trends is tiring and the volume of data/ information we need for decision making increases by the square of the number of factors you want to optimise for.   It is here that we find complexity but also realise that we cannot optimise or drive for anything.  Whilst living with complexity is a critical skill for senior teams, it is here that we find that we cannot optimise and we appear to a ship adrift in a storm being pulled everywhere, with no direction or clarity of purpose.  A true skill of great leadership is about knowing what to optimise for & when. Given the ebbs and flows of a market, there is a time to dwell and live with complexity optimising for many but knowing when to draw out, provide clarity, and optimise for one thing is critical.

The questions we are left to reflect on are:

When we finally master finding clarity to optimise for one thing and equally living with the tensions, conflicts and compromises of optimising for many things; we move from average to outperforming in terms of delivery and from decision making to judgment.

Great leaders and teams appear to be able to exist equally in the optimisation for both singular and complex purposes at the same time.

This viewpoint suggests that when the optimisation is for a singular focus, such as a three-word mission and purpose statement that provides a perfect clarity of purpose, is actually only half the capability that modern leadership needs to demonstrate.