Showing posts from June, 2013
Show All

Whether we know it or not: every piece of information we share on the internet creates a unique profile that speaks volumes about our personality.  Tony fish, founder of the Innovation Warehouse, shocks audiences by showing them how much data is collected from your online presence: without you being aware of it.  He also highly  recommends  the book "Predictably Irrational" by Dan Ariely which delver more into the subject.
much more to read »

Does Data Understand the meaning of a WINK? Video #ds13

Segmentation model based on data 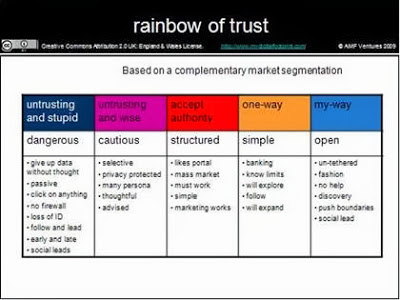 Source for new thinking: http://blogs.hbr.org/cs/2013/06/a_new_framework_for_customer_s.html It started with… " You know, I don't think I believe in segmentation anymore." She said it fast and softly, almost in hope that the sounds around us would make it inaudible. But we did hear it, and responded, "Well, we don't either." From observing … " we were finding an increasing disconnect between telling people about segmentation, targeting and positioning on the one hand, and about the increasing shift of control from brands to consumers, on the other " HBR presents a new kind of segmentation based the combinations of jobs that customers need to get done.  Think Ted Levitt's famous comment about selling ¼ inch holes rather than ¼ inch electric drills. They provide this outline…. Step #1: Identify the contexts in which customers are using the company's products. Step #2: Combine information about transactions and cust
much more to read »

How PRISM could work via @ashk4n - excellent insight 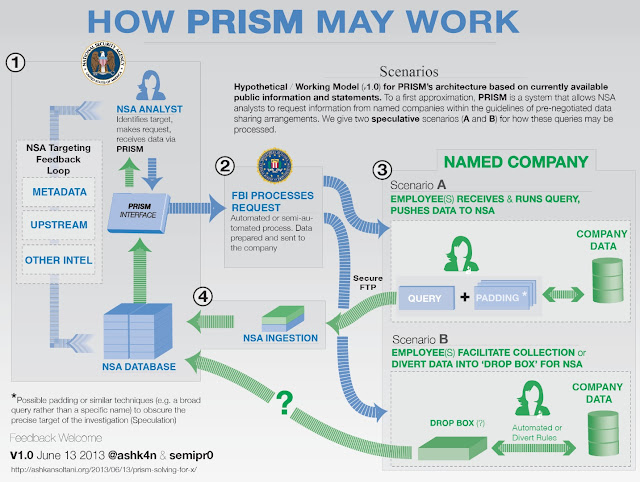 Source: http://ashkansoltani.org/2013/06/14/prism-solving-for-x/ This is presented by Ashkan Soltani who is an independent researcher and consultant focused on privacy, security, and behavioural economics. The entire post is worth reading as it just tries to put some sense out about what is possible….
much more to read »
More posts