Is social observation affecting the outcome aka The uncertainty principal? 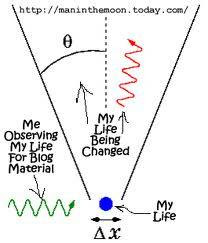 Following on from the previous post about Twitter - To perform a legitimate experiment, scientists must observe the results of a system in motion without influencing those results. This is not as easy as one would first think.

Back in the 1920’s Werner Heisenberg developed The Uncertainty Principle as part of thinking about quantum physics.  Heisenberg determined that “both the position and momentum of a particle cannot be known simultaneously.”   The dichotomy raises the mind-boggling prospect that unless we observe an event or thing, it hasn’t really happened, that all possible futures are quantum probability functions waiting for someone to notice them - trees falling unheard in a forest. Maybe this blog never existed until search for it and Google created it as you wanted it!

(Yes for those who have mastered QM I am confusing the observer effect of with the uncertainty principle. Technically the uncertainty principle has nothing to do with "observing", it has to do with measuring. The observer effect is a supposed effect of observing an event and the influence of your observations on the event. No one would ever have to actually observe a particle's position to obfuscate its momentum, the mere act of using the photons to measure its position, even if nobody ever observed it, would suffice. It's the act of measuring, not actually observing that causes the uncertainty principle, but when observation requires something that may cause change the problems occur)

Anyway, how does this relate to the analysis and feedback within my framework of thinking about Digital Footprints?

Think about it this way:  The mere act of observing a social change, changes the behaviour of that social object.

In reality TV they put cameras in front of “real” people for the viewer to watch how “real” people behave, date, compete, etc.  But this in fact makes those on camera less and less real.   They’re not actors, nor are they behaving like normal people.  They are somewhere in between the two.

In the case of Twitter predicting a movie success, could an editor or critic have the same effect, if they could do it in real time and not on paper?

How does Google real time search affect your searching habits and techniques.  You no longer have freedom in the web, as the recommendation is based on what the crowd says is important and therefore we are actually just lemmings.

Do I only now post based on what people want to read based on clicks and response data or what I find interesting – are we (am I) adaptive or reactive, do we want to be individual or loved?