As Apple becomes Microsoft and Google slips into the gap left by Apple; Is Microsoft free to become the new MICROOGLE?

Fridays irrational thinking - As with everything on my blog, I am addressing this thought from the standpoint of "user data," as it unlikely that, from any other rational stance, you would reach the same thought. 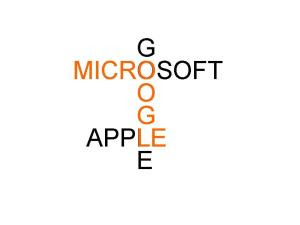 Steve Jobs (Apple) knows best and knows what you want.

OS10 moves even further to Apple taking entire control of what you do and how you do it. It is locked down as UI/UX experience is everything, and it is good - but not for everyone.

iPhone and iPad users ( and then OS10 and Apple.TV) are forced to download apps from the apps store. These pre-approved and selected apps are the only offer. Only those Apps that Apple deems non-strategic to their view of the world (how many music apps are there that integrate to iTunes?)  Like editorial control in News and print, I know better than you. I will not be biased, other than what I like.

The follows (believers) are fanatical and all faults are features.

Proposition Two: Google slips into the gap left by Apple

Google is picking up now Apple has left a space and is now the driver of  innovation; trying, testing, pushing, forging and fighting.

Google is pushing further down into the OS level with an 'open(ish)' and collaborate approach reaching out and across into other devices (mobile and TV) and providing zero cost platforms for others to lead on true creativity, innovation and dam right wacky stuff

Scenario: Is Microsoft free to become the new MICROOGLE?

Windows 7, though it pains me to say so, is good and quite cleaver.  10 years late and mobile is still not secure enough for business, but options have become available

Apple is a very few people

No one is sacked for buying Microsoft and its cheaper

"Blue screen" is not a known concept for anyone under 20

Microsoft appears "open" - you can load any application, without editorial control

Freedom is a sweet word, a taste to savour, say it loud, exercise your freedom! (F&F 1987)

It is possible that Apple and Google could cross the creepy line in the need to build revenues, leaving the market wide open for Microsoft (assuming they continue to up their game)!