How much value are you giving away by sharing you privacy? #mdfp

In the book "My Digital Footprint" eight business models were explored, this blog is an update to model 5. If the balance of value is not already in favour of web companies, as they barter free services for your privacy and data it soon will be, as they need more data to continue their growth and seek differentiation but are unable to offer more in return.  The blog presents that there is now a continuous test on the consumer resolve for privacy, the unmarked boundaries of private and thresholds of liberty as web companies find routes to extract more information on you, without you realising.

In March 2010 Facebook was estimated to be worth $11.5bn, Twitter $1.4bn, Linkedin $1.3bn and Google $170bn. But why? In simple terms these web companies and many more like them, consist of millions of users creating and sharing large amounts of content which is subsequently monetised through advertising to create these public valuations.

The implied contract between web companies and their users is simple; they'll provide users with free web services in exchange for "permission" to datamine and monetise the users "public" data via related advertising. This is a digital data trade as show in diagram. 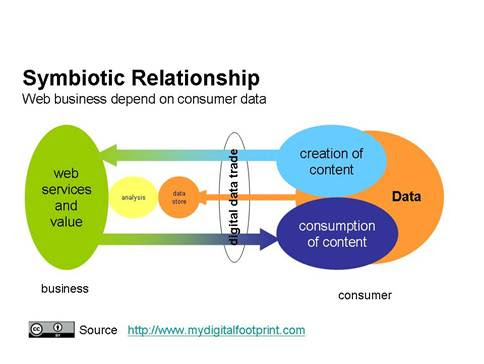 However, there is a hidden cost of this seemingly beautiful symbiotic relationship, the more that users make "public" their data, the more they relinquish their privacy.

It is this tension between the users desire to protect their privacy and limit their "public" data, that contrasts with the monetary needs of a web service business  to access and liberate more of the users "private" data; that is constantly testing the symbiotic relationship.

Although this freemium model is working well during this Web 2.0 era,  advertisers are seeking to maximise their ad budgets through improved targeting and behavioural advertising. A mechanism to make this happen is if web services can convince their users to either make public more personalised information or to unilaterally force through privacy policy changes. To do so might result in users abandoning the web service, to not do so might result in the advertisers spending their budgets elsewhere.

For example Facebook has for sometime been changing their users privacy settings in order to test the users elasticity of acceptability.  On more than one occasion users have protested so vehemently against the changes, ironically using Facebooks own Fan pages, that Facebook have rolled back the privacy settings, only for them to make smaller incremental privacy policy changes later on which the users then seemingly accept.

Only recently Facebook unilaterally chose to remove its users' ability to control who can see their own interests and personal information. Certain parts of users' profiles, "including your current city, hometown, education and work, and likes and interests" will now be transformed into "connections," meaning that they will be shared publicly. If you don't want these parts of your profile to be made public, your only option is to delete them."

Facebook may have reached a tipping point where the potential value from forcing more openness, by unilateral changes to privacy, for user data outweighs the potential lose of users to an alternative.

Of course the fight to retain user privacy remains a tender point as proved by the recent introduction of Google Buzz and the scant disregard that Google placed on users privacy.

The draconian way in which Google forced every GMail user to adopt Buzz was bad enough but to then set the privacy setting to "public" as a default meant that everyone's email contacts where exposed publicly. Only a deafening outcry across the blogosphere and beyond led to Google publicly apologising for their faux pas and resetting the privacy policy of every user back to private as a default.  Google's monetisation of Buzz may take a lot longer now that users will be more cautious to open up their privacy settings.

It is not difficult to comprehend that there is a balance between the amount of data that users will or can give up and the level of data that businesses demand for monetisation.

For a symbiotic relationship to develop this balance between brand, trust, privacy, security, risk, identification and value needs to be understood and analysed.  Fear, uncertainty and doubt go hand in hand with the erosion of privacy and liberty, get the balance wrong and the user will not give you data and the web business will not survive. Finding and pushing the balance is the new executive skill.

Companies, such as Kontagent, Klout, Gravity, Rapportive, Etacts, Grader and Flowtown are building analytical tools that track and interpret the way users behave on Facebook, Gmail and Twitter i.e the Public Interest Graph, particularly how they interact with third-party applications. Such analysis tools help figure out, for instance, which invitations lead to the most registrations and why. Collecting data is one thing, making it useful quite another and that’s the key challenge for every business in this digital era, indeed AMF Ventures would go as far as to say this is the next battle ground of the web.

Disruptive change to a status quo

A well published fact from the dark side of digital footprint data is that the invasion of liberty or privacy, snooping, identity fraud and the subsequent abuse of your data costs £25 per person in the UK Source Identity Theft

Counter to this cost is the economic value created by user data, which is in the order of £100 per user.  Market cap of Google (March 2010) divided across the number of users.  Each user value will increase if Youtube, Facebook and other social media valuations are added to the equation.

Your digital data has value – it is fragmented but users may realise that they don't get a fair trade.  The value created by them is far greater than the free service reward.  Free may be good, free plus cash or share of an IPO for my privacy could be an alternative model for a new entrant who wants to cross the next boundary of user privacy, but at least there is an exchange value.  This could leave those who want to hide their privacy having to pay, rather than free-riding.