The Strange Order of Things. How sensors can understand your feelings ?

The Strange Order of Things: Life, feeling and the making of cultures by Antonio Damasio Follow him on Twitter 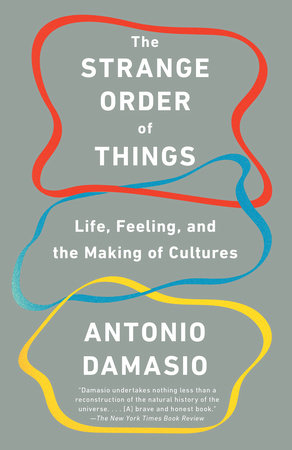 For decades, biologists spurned emotion and feeling as uninteresting. Antonio Damasio, a professor of neuroscience, psychology and philosophy, sets out to investigate “why and how we emote, feel, use feelings to construct ourselves and how brains interact with the body to support such functions”. He demonstrates that we are our chemistry and that feelings are central to the life-regulating processes which keep us alive and thriving. What the body feels is every bit as significant as what the mind thinks and we can turn to emotions to explain human consciousness and cultures.

It is worth spending a few minutes reading the praise section as the depth and quality will confirm this book is worth taking seriously. You may not like the content or agree with it - but it is worth reading.

The link here to data and sensors is that maybe we can determine/ infer what people are thinking, not by brain waves but by your biology and realtime chemistry. It opens up a whole new set of thinking about the importance of your DNA, diet and environment. My Digital Footprint just got a whole load interesting again.

The book is an investigation into the force of homeostasis, “life is regulated within a range that is not just compatible with survival but also conducive to flourishing, to a projection of life into the future of an organism or a species”.

Antonio Damasio argues that we descend biologically, psychologically, and even socially from a long lineage that begins with single living cells (and probably how cosmic rays helped in the mutation and a self-gene led to survival of the most adoptive.) The implication is that our minds and cultures are linked by an “invisible” thread to the ways and means of ancient unicellular existence and other primitive life-forms. Therefore our makeup/ chemistry is a powerful unseen force, a striving toward life maintenance that governs life in all its guises, including the development of genes that help regulate and transmit life. The Strange Order of Things is a landmark reflection that spans the biological and social sciences, offering a new way of understanding the origins of life, feeling, and culture - and then starts the thinking to specific ( narrow) AI. Thankfully not generic or the singularity!

From Plato onwards, western philosophy has favoured mind over “mere” body, so that by the time we get to Descartes, the human has become hardly more than a just the brain. (i think therefore I am)

Following on from Nietzsche, what the body feels is every bit as significant as what the mind thinks, and further, both functions are inextricably intertwined. Indeed, from the very start, among the earliest primitive life forms, affect – “the world of emotions and feelings” – was the force that drove unstoppably towards the flowering of human consciousness and the creation of cultures.

“Feelings (read your biological chemistry) have not been given the credit they deserve as motives, monitors, and negotiators of human cultural endeavours.” The suggestion is that a lot more of our lives are controlled by who we are than by what we would like to think we are. This has been a debate for a rather long time :) - however we are moving from random thinking to data, and with data comes the ability to test, repeat, try and assess. It may never prove!