How to survive and thrive in the third digital revolution : #designingreality


How to survive and thrive in the third digital revolution : #designingreality


By the brothers Gershenfeld, Neil, Alan and Joel 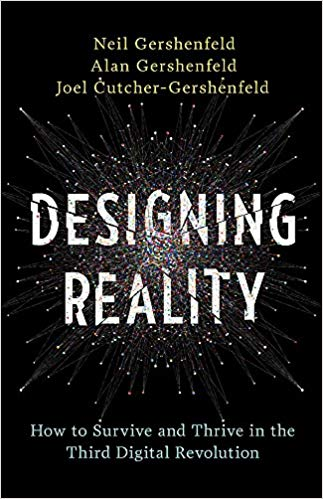 This books takes the concept of FabLab from the common understanding of a simple fabrication lab where you can make one of (almost) anything (here is a global list of FABLABs); to how digital tools changes economics and the competitive nature of nations policy.
One to read but be very open minded to ( and the bias of) Path dependency (you can only continue on the path as the constraints and inertia prevent you from change) Why it will be so hard for companies to adopt to this thinking.
“The first digital revolution was in communication, taking us from analog phones to the Internet. The second digital revolution was in computation, bringing us personal computers and smartphones. Together they fundamentally changed the world. The Third is digital fabrication.”
The book brings the perspectives of science, technology, social science, and humanities to the thinking on digital fabrication and its impact. Starting from the widespread coverage of 3D printers, the maker movement (MAKE) and IoT (Internet of Things) as the visible parts of the iceberg.  The bigger story is bringing the programmability of the virtual world of bits into the physical world of atoms. Since that physical world is where we live, the implications of the third digital revolution may be even greater than those of its predecessors. This one is built on the same fundamental science of digital, only now it enables both bits and atoms to be manipulated. Just as digital communication and computation became personal, the digitization of fabrication offers the promise of personal fabrication, enabling individuals and communities to produce and share products on demand, wherever and whenever something is needed.
Positioning that we are still at the early stages of the first two digital revolutions, this vision of a 3rd seems fantastical. And yet, not only is it theoretically possible, but we are already on the path to it becoming a reality. Fab labs, community-based labs where individuals can access powerful tools for digital fabrication, have been doubling in number every year and a half since the first lab was established in 2003. Like the early years of the first two digital revolutions, however, the explosive nature of this new revolution is not readily apparent to the casual observer.
Everyone has agency to contribute to this revolution, and Designing Reality is your guide to not just surviving but thriving in the third digital revolution.
The stages …