How to disappear by Frank M. Ahearn 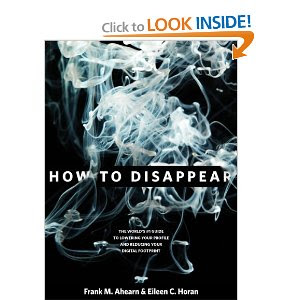 From the world's preeminent people finder—an insider's guide to disappearing

How to Disappear is the authoritative and comprehensive guide for people who seek to protect their privacy as well as for anyone who’s ever entertained the fantasy of disappearing—whether actually dropping out of sight or by eliminating the traceable evidence of their existence.

Written by the world’s leading experts on finding people and helping people avoid being found, How to Disappear covers everything from tools for disappearing to discovering and eliminating the nearly invisible tracks and clues we tend to leave wherever we go. Learn the three keys to disappearing, all about your electronic footprints, the dangers and opportunities of social networking sites, and how to disappear from a stalker.

Frank Ahearn and Eileen Horan provide field-tested methods for maintaining privacy, as well as tactics and strategies for protecting personal information and preventing identity theft. They explain and illustrate key tactics such as misinformation (destroying all the data known about you); disinformation (creating fake trails); and, finally, reformation—the act of getting you from point A to point B without leaving clues.

Ahearn illustrates every step with real-life stories of his fascinating career, from undercover work to nab thieving department store employees to a stint as a private investigator; and, later, as a career “skip tracer” who finds people who don’t want to be found. In 1997, when news broke of President Bill Clinton’s dalliance with a White House intern, Ahearn was hired to find her. When Oscar statuettes were stolen in Beverly Hills, Ahearn pinpointed a principal in the caper to help solve the case. When Russell Crowe threw a telephone at a hotel clerk in 2005, Ahearn located the victim and hid him from the media.

An indispensable resource not just for those determined to become utterly anonymous, but also for just about anyone in the brave new world of on-line information, How to Disappear sums up Ahearn’s dual philosophy: Don’t break the law, but know how to protect yourself.

AN EXCERPT: How Not to Disappear

There are several books and Web sites that explain how to obtain a new identity. If you are a not a criminal or international spy you do not need a new identity to safely and discretely disappear. . . . What people fail to take into consideration is how they can test out their new identity. Do you book a trip internationally and just wing it past customs? Do you speed in your car and wait till you get pulled over and a have the cop run your new license? Perhaps you walk into social security office with your birth certificate and apply for a social security number at the age of thirty-five and explain you have been living in a cave for the past twenty years? . . . New identities are a bad idea. Imagine that you are now Mr. Vincent Vega from Palm Springs, and you’re hanging out with your lady friend and her family sipping Pina Colada’s and over walks your best friend from high school. This dumb nut starts calling you by your real name, Dexter Plaidpants. Just try explaining that to all at the table—cover blown. New identities are like roulette: It is only a matter of time until your number comes is up!

Frank M. Ahearn and Eileen C. Horan are known as the “devious duo.” Veteran privacy consultants in the business of helping people who want to start a new life, they run AhearnSearch.com, a global skip-tracing company, and Disappear.info, which works with people and organizations in fulfilling their privacy needs. They have been featured in over fifty newspapers and magazines worldwide, including GQ, London Times, and Die Welt, and as far off as China, Australia, New Zealand, Germany, Italy, Portugal, Croatia, and Hungary. They have been guests on over 100 radio shows and on BBC and CNN television programs. Born and bred in the Bronx, Ahearn divides his time between Venice Beach, California, and New York City. If you can’t find him in either one of those places, visit frankahearn.com.