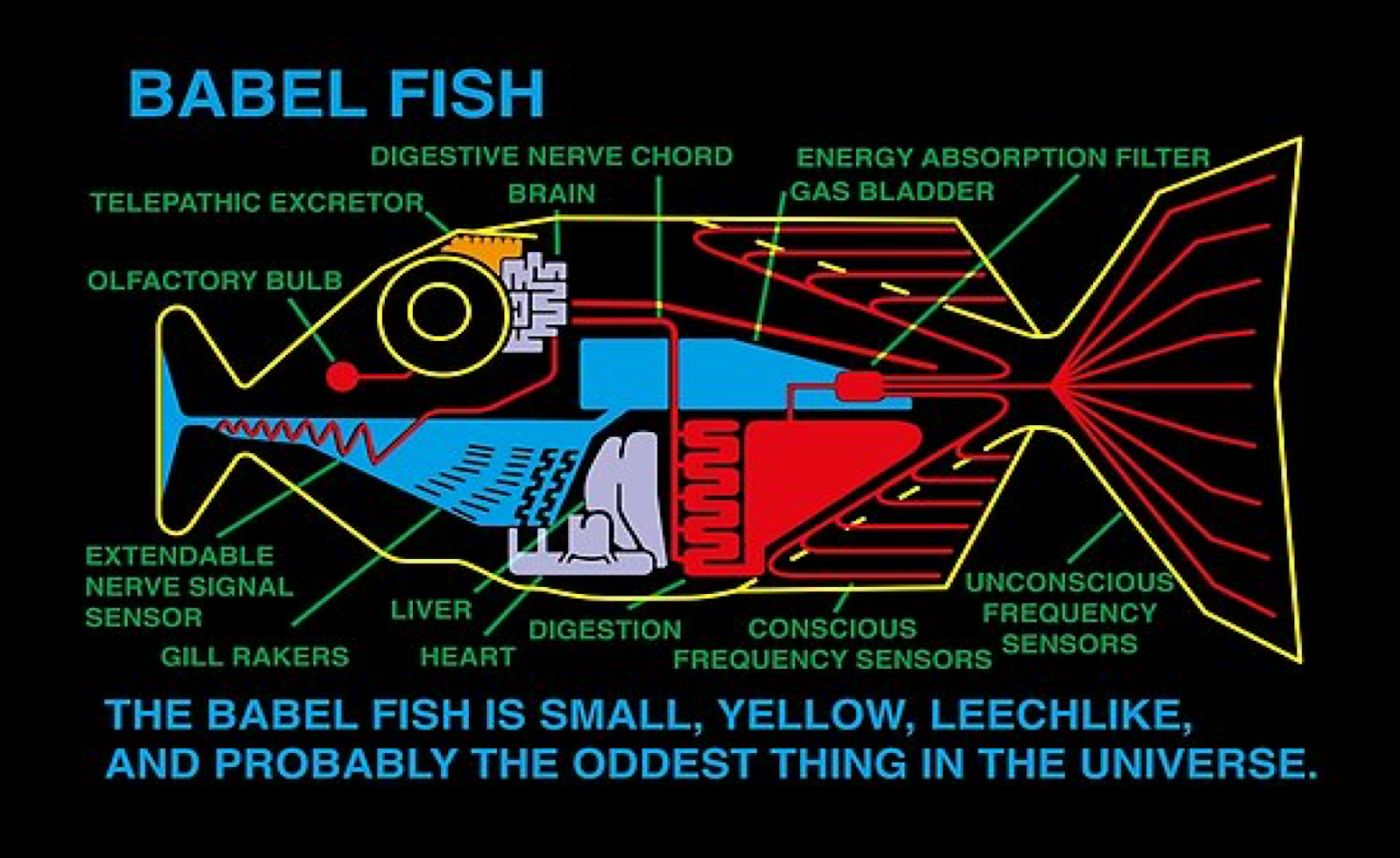 "The Babel fish is small, yellow, leech-like, and probably the oddest thing in the Universe. It feeds on brainwave energy received not from its own carrier, but from those around it. It absorbs all unconscious mental frequencies from this brainwave energy to nourish itself with. It then excretes into the mind of its carrier a telepathic matrix formed by combining the conscious thought frequencies with nerve signals picked up from the speech centres of the brain which has supplied them. The practical upshot of all this is that if you stick a Babel fish in your ear you can instantly understand anything said to you in any form of language. The speech patterns you actually hear decode the brainwave matrix which has been fed into your mind by your Babel fish.

Picking up an interesting phrase "understand anything" which has become framed to mean language and its translation, “said to you in any form of language” however, did Douglas Adams mean more as he did have unconscious frequency sensors?

The issue of language is that language (words) needs to be specific to a person if it is to be understood in terms of both context and understanding.  Have you noticed that sometimes you have to explain something three of four times, using different analogies or metaphors before the barrier drops, engagement starts and the intended intent of the words/ language becomes common understanding?   It is a dangerous assumption that any of our words will be clear to everyone in terms of delivering the message and intent.

Harry Potter introduced to most people the concept of a video newspaper, the next version of a newspaper will be where the words that we see and read will be aligned to me personally. In the future, we will not all read the same words for any news story, even though it is the same story, we will not just have custom news but custom words, phrases and metaphors, each story will be told using words that when I interrupt them based on my experience, I get the same meaning as everyone else who is reading the same story.

If we all get the same news, we use our own bias to take away the story I want.

If I share a story, it will change the language to meet the recipient, so the receiver understands the sentiment and not just the facts.

This new upgraded, evolved/ adopted fish is able to not only translate but also transpose, so you will not hear the words they spoke but the intention that they wanted to give you.  Surely this is understanding.

As humans, when in a face to face conversation, we know when there is a problem in terms of an intent/ understanding gap because of feedback based on peoples faces, their body language and questions.