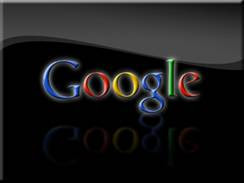 When writing my digital footprint I updated the Six screen’s of life work originally developed for mobile web 2.0 (extract on read/write web)    However, I have now realised that I missed one out.

What is said in summary is that for the most part, we are consumers of content. In our daily lives we consume professionally created, produced and edited content from traditional and new media providers on our ‘six screens of life’. These screens are divided into two broad categories, big screens and small screens, each with three subgroups as per figure 2. 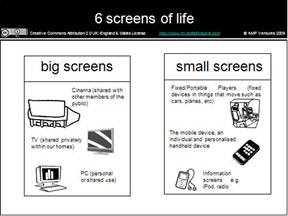 Both for big and small screens, the user has traditionally been a passive receiver of content (content has been broadcast to the user) or the user has been seen as a member of a carefully controlled and managed audience (e.g. voting) – but not as a primary creator of content. For instance:

However, according to Forrester, “Monolithic blocks of eyeballs are gone. In their place is a perpetually shifting mosaic of audience micro-segments that forces marketers to play an endless game of audience hide and seek.” As advertisers lose the ability to invade the home, they will have to wait for invitations, and this means they have to learn how to adopt and understand the user, a good reason for understanding the impact of digital footprint.

Reflecting the above trend, most of the content on the mobile device to date has also been the ‘re-presentation’ and ‘reproduction’ of existing material delivered to the mobile screen. The mobile device, however, is changing from being a primary consumer to a major creator of content. It is worth noting at this point that the separate screens of life don’t have to be managed or offered by separate service providers, devices will no longer control what you can do and where, instead the screen will be able to come under the control of the user, with services relevant to the size of the screen. However, least we forget that the interactive age of communicates and social media delivers diversity and innovation, broadcast amplifies.

Why was I thinking about this?  I have been working out how long a Tweet is relevant for as it moves from the top of the list, down to the unlit portion of your web page.  Have some interesting data on this ready for the next blog.

the journey and the destination

I know the journey is more important than the destination, but destinations provide an essential point as they mark somewhere to head towards.  All journeys start with a single step, and for me, this journey started a little over three years ago. I have spent this past period considering the question, “How do we make Better Decisions.” This question was refined to become “How do we make Better Decisions with data.” This expanded into “How do we make Better Decisions with data and be better ancestors?”  My journey can finally see a destination.  However, I am now facing a more significant challenge. Having reached the destination zone, I want to leave a mark, and it's straightforward to imagine planting a flag. The hope is that when the flag is planted some of the team back at home can see that you've reached the final place.  In most circumstances, the destination is not in the Line-of-Sight. Therefore you pick up the flag and wave it, hoping that somebody with binoculars can
much more to read »