http://www.chetansharma.com/usmobileupdateQ32011.htm Download PDF (1.3 MB) Once a quarter I get this from Chetan Sharma - an excellent US based mobile analyst   Summary The US mobile market continued its blistering pace of growth and ecosystem restructuring. While China and India lay claim to the fastest growing markets on the planet, the many of the meaningful and impactful trends are originating out of the US market with software at the epicenter of creation, growth, change, evolution, and destruction. The US wireless data market grew 5% Q/Q and 21% Y/Y to reach $17B in mobile data service revenues in Q3 2011 and is on course to increase Y/Y by 22% to $67B in 2011. As predicted, Samsung overtook Apple as the leading smartphone OEM. However, Apple will continue to dominate profit share for the foreseeable future. Smartphones continued to be sold at a brisk pace accounting for 57% of the devices sold in Q3 2011. Operators are averaging 70% of their postpaid sales as smartphon
much more to read »

The Interaction-Design.org Foundation is a labour of love founded by Mads Soegaard in 2002, and in 2010, his wife, Rikke Dam, joined the project. Apart from Rikke and Mads, hundreds of people have helped out and continue to do so. We're on a mission to make free and open educational materials: There are so many great minds in the Human-Computer Interaction and Interaction Design community and we want to empower these authors to reach all their interested readers around the world. We believe these authors have the minds to change the world and deserve a publishing venue truly designed for the author and the reader, not the publisher and the profit. http://www.interaction-design.org/ http://www.interaction-design.org/encyclopedia/interaction_design.html
much more to read »

The US  Stop Online Piracy Act (SOPA)  is controversial depending if your business model needs copyright protection (helpful) or user-generated content (censorship) AOL, eBay, Facebook, Google, LinkedIn, Mozilla, Twitter, Yahoo and Zynga delivered  a letter  to members of the U.S. Senate and House of Representatives last month that argues SOPA “pose[s] a serious risk to our industry’s continued track record of innovation and job creation, as well as to our nation’s cybersecurity.” They later ran the letter as a full-page ad in The New York Times. Meanwhile, the Motion Picture Association of America (MPAA) and the Recording Industry Association of America (RIAA) support the bill. “If rogue websites legislation passes, American jobs will be preserved and the Internet will continue to be free and open,” reads an MPAA blog post. “Content protection laws have given us the Internet of today, alive with innovation, free speech and commerce.” As the opposing sides launch argumen
much more to read »

The older we get the more we hate change

US research – December 2011; Poll Position   surveyed 496 about their Facebook account. They were asked the following question: “Are you comfortable with the personal information you provide on Facebook?” The poll results are weighted to be a representative sampling of all American adults, and this particular question should be taken with a margin of error of plus or minus 4 percentage points. 69.5 percent of Facebook users in the US say they are comfortable with the personal information they give out on the social network. Out of the remaining respondents, 23.2 percent said they are not, and 7.3 percent have no opinion. Women are more okay with it than men, as are younger people compared to their elders. Young people are unsurprisingly far more comfortable than older people in sharing content on the site. In the 18 to 29 age group, 81.0 percent of Facebook users said they are okay with the personal information they provide on Facebook, while 19.0 percent said they are not. On the
much more to read »

Facial recognition and the office party 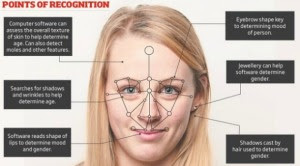 Infographic: How much you Can drink At Your Office Party? 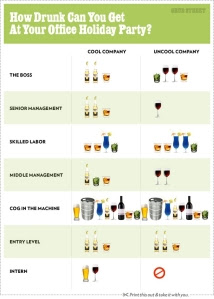 Just a little big of fun !
much more to read »
More posts