The Paradox that war and monopoly are the same thing.

Peak Paradox is a framework to help you reclaim clarity and control as we believe that if you cannot see the paradox, you have been framed and are in a model where someone else is in control.  When you can see the paradox in the data, information, recommendation or decision, you will have improved your clarity.  This is a guide on how to apply the framework to unlock business models, concepts and complexity.

Most aspects of everyday business and life can be questioned within the boundaries of the Peak Paradox Framework.  I have been exploring that we tend to go out of bounds for a while but find it is too hard to stay there for long. Movement outside of the boundary tends to be a transitional state.  The thick red line illustrates the usual boundaries in the figure below.  This post explored how to make better decisions using the framework and laid down the idea that some decisions can occur off-piste, outside of the normal boundaries. It presented the reason why we need to minimise shared decision making, find followers and create shared passion if we want to make a difference.  Indeed it is no longer about enemies in the camp but about identifying those who share the belief. We must have diversity and not about diversification away from the shared belief. 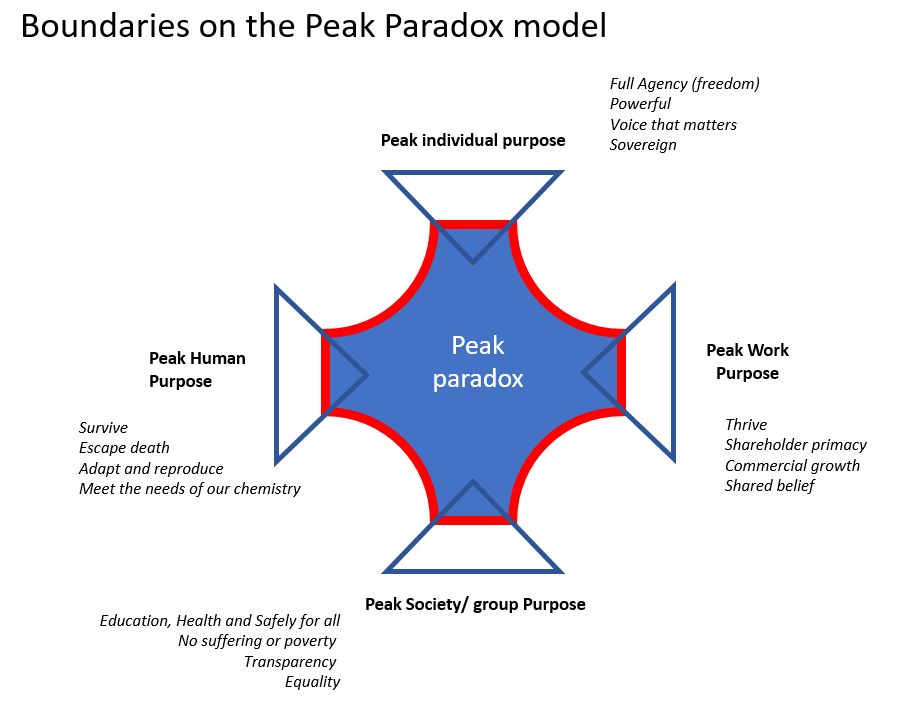 I explored the concept that we are transitioning from Physical beings to Information beings.  The article proposed that our existing models for oversight and governance are breaking and that we need to think about addressing this emerging gap.  In an earlier post, I explained that many models take us to the boundaries in the Peak Paradox framework, such as cults, politics, beliefs and religion.  This post presents the thinking that the economic model of monopoly and political activity of war are outside the framework and a transitional state.

In the figure below, war and monopoly are outside the boundary between Peak Individual Purpose and Peak Work Purpose.  War is nasty, inhumane, and complex, but it serves as a tool to acquire more land with a historical lens. Control of land gave you access to resources, people and materials.  The more land and more resources you had access to, in straightforward terms, enabled a few to realise their Peak Individual Purpose (become more sovereign) and for others to realise Peak Work Purpose through growth.

A more modern version of war is the economics of monopoly, duopoly, or cartel, where a few seek to control resources for their personal gain, enabling them to achieve Peak Individual Purpose through their companies having control.

Both war and monopoly have become increasingly regulated over time. We have created, as humans, complex rules of engagement, governance and oversight.  In part to ensure control and power does not fall to one person in a democracy, to protect the vulnerable and to respect life.  If they work or not is another story. 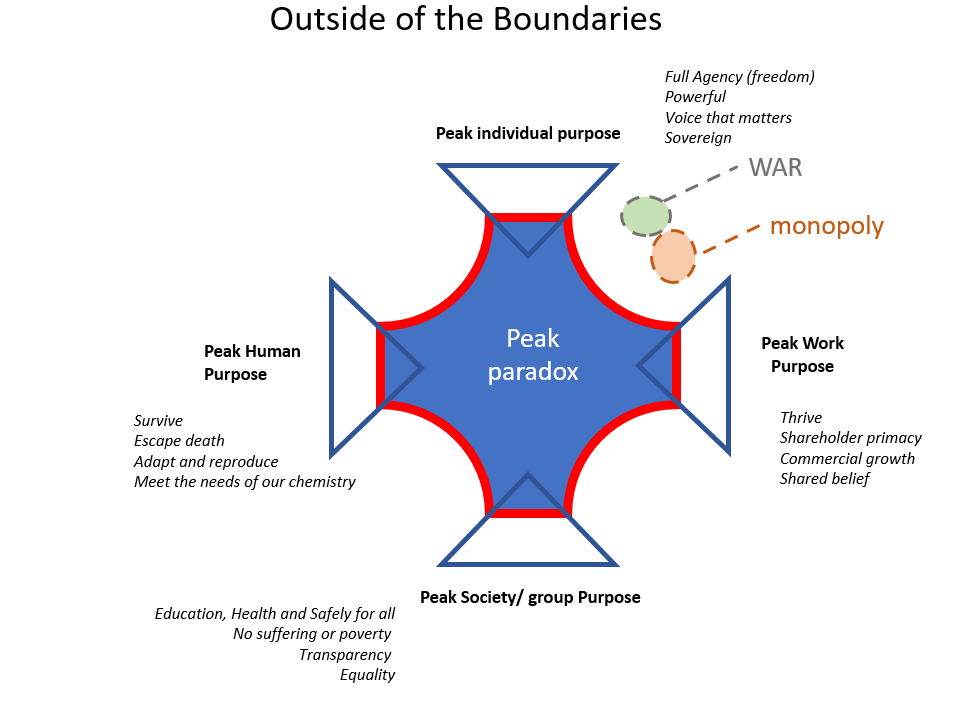 It is not that physical has or will vanish; we will co-exist as both physical and informational. Our physical being is still very much here, but we live in an emergent digital/ data augmented world.  War has become cyberwarfare and monopoly of land, and people have become the monopoly of data that indirectly controls people and land, often through an instrument such as debt. 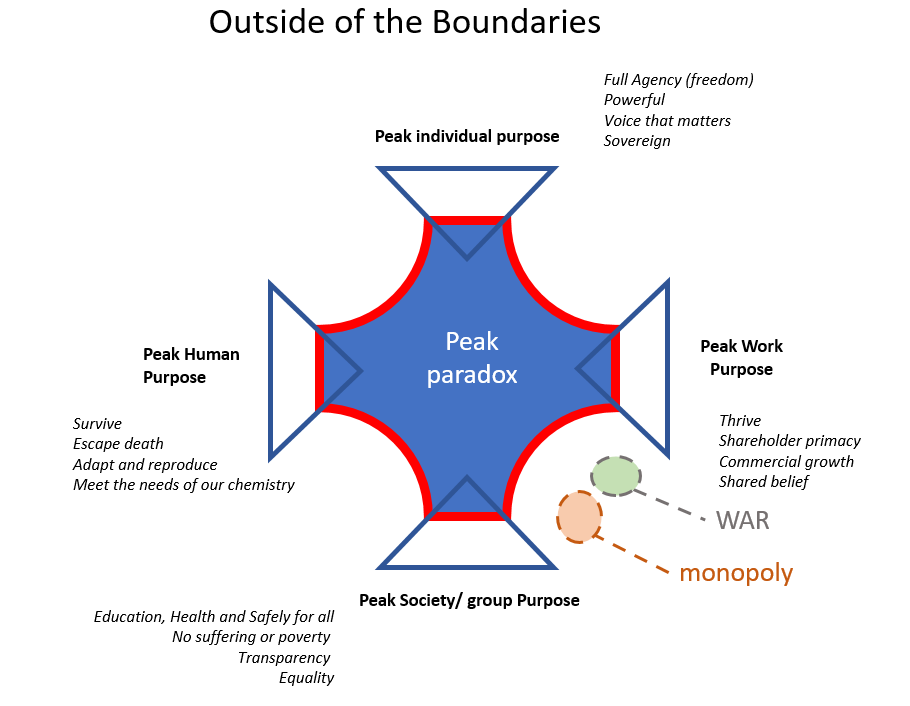 The question being asked is, “have we changed more than just the nature of war and monopoly as we expand from physical beings to information beings?”  Our rules, methods, insights and policy work for us as physical beings, but do the same systems and structures work in an information age.  Is the paradox that we have to deal with the same outcomes from war and monopolies (control and power), but there is a shift.  What is this shift?   Yes, some cybercrime and cyber warfare is a replication of the historical war framing, insomuch that an individual, cause or nation wants to use data/ digital as a method of control.  But this is just the natural advancement of physical beings adapting to new technology. Gunpowder is another example.  However, information being cyberwar is a fight or rage against the machine trying to bring about a better life for everyone and expose injustice - this is different. Past freedom fighters against oppression look similar.  A monopoly of data is different to a monopoly of physical resources because data is data.  Data is, by its nature, non-rivalrous and non-excludable. This simple fact is that you cannot declare ownership of data (though many people try); you cannot control it; you lose nothing when you copy it. It is why data is data.   Data can bring about better health care; data can bring about better education; data can bring transparency, and data can bring equality.

An AI can make better decisions, if we knew what this is, without the bias of human politics. However, it is far too easy to keep our physical being lens on everything as we like it, we are used to it, our systems are aligned to it, and we can ignore or rubbish the emergence and augmentation of data in our decision methodology.  A critical point beginning that what we had as oversight and controls for war and monopoly worked for physical beings. The same systems break as informational beings because there is a shift in purpose and even outcomes. What is hard to comprehend is that this is not a transition; it is the emergence of information beings and that both will co-exist. We need to keep adapting our physical rules but need new thinking for informational beings.

What does the Peak Paradox framework highlight about this situation? There is an assumption that we are aligned (what type of being are we or both) and how we understand if there is alignment in the team.  Because this is hard and subtle, we prefer to assume and make jumps because curiosity and questioning expose ghosts in our thinking and the system;  like conflict, tension and power. We don't like facing up to these as they are hard and reflective. The Peak Paradox framework will surface the ghosts and determine if there is an alignment or a delta in the team, project, mission or purpose.  If we are only physical beings in our views, we will ignore digital and data and the coming information being.   If we are information beings, we see that the controls don’t work, and we are free to exploit an emergent space.  The current data monopoly holders don’t look like monopolies through the lens of physical beings.

The current data monopoly holders don’t look like monopolies through the lens of physical beings.