Is there a better M&A model ? 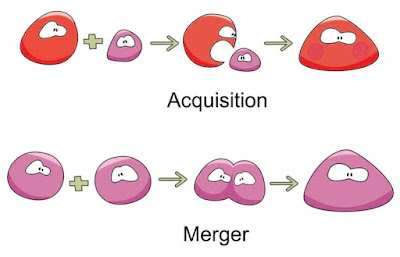 Have been challenged to rethink certain growth models and the often significant issues created by: buy, merge and acquire thinking as opposed to invest and build.  The data (success as value created as realized in 3 years as per plan) from BigCo takes over MinnowCo is not good (1 in 10 achieve above plan), the same type of data from BigCo takes over SmallCo is no better with only 8 in 100 achieving plan.  Near equal size takeover/ merger of BigCo and BigCo is unknown on plan, but market data would suggest it is not great either.
On a pure financial measure as a decision, surly the risk class of M&A activity for value creation would be near junk level, In all other classes of risk - such activities would not be approved.  However, there is way more at stake than pure financial metrics such as exits, vesting, relalisable gain, bonuses and incentives.
Assumption 1 + 1 = 3.
A question is why is the purpose of M&A to combine both?  Some regulators of BigCo + BigCo force some sell off of some assets, but why is that not a wider part of the thinking at all levels?  Yes a minnow they may be 100% focussed but that is rare apart from Acq-u-Hires.
Working on the premise that we stuff all aspects of OneCo into TheOtherCo - is that action represented in nature. Two thoughts:  DNA and Food
The DNA model appears to scrap, throw away half of the data, value, person; the new (from the selection of parts from the two originals) is a true mashup, not even a combination.  Once the new is birthed (mamel) it is not left to fend for itself but has a time to learn about its role in the environment and take on new skills. Autonomy and decision making comes with time.
If we start to look at M&A using this lens and create two new from the combination (scrapping 50% of each may prove unpopular).  Both taking aspects of the originals which suits a model that they can both flourish from? Would this not allow each of the NewCo’s (two companies) to create much better versions of themselves.  lf, rather than a larger financially stronger but weaker in all other aspects combination of the two as one, we create two new ones which are both stronger? Perhaps M&A should become Merger and Creation!
The Food Model appears to select what is needed and excrete the rest.  The ameba engulfs food, the animal eats the fruit, the meat eater eats the prey.  In these cases the eater ingests the food, the body chemistry takes what it needs and excretes the rest as waste. In our commercial model the acquirer acquires but keeps everything.  How comfortable would you feel if you ate but had no relief? Why with companies are we so keen on acquiring to grow, but nature does not have the same no-waste model we use. Indeed the waste is most often food for the next part of the ecosystem.  Perhaps M&A should be Acquire and Excrete.
data merger strategy viewpoint