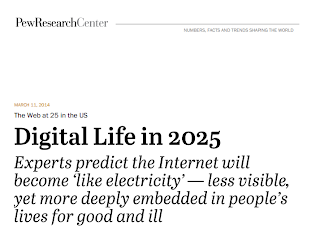 Pew Research Internet Project has released (March 2014) a report on Digital Life in 2025 based on expert interviews.

The report marks the 25th anniversary of the creation of the World Wide Web by Sir Tim Berners-Lee who released the code for his system, for free, to the world on Christmas Day in 1990.  The Web became a major layer of the Internet. Indeed, for many, it became synonymous with the Internet, even though that is not technically the case.

This report looks at the present and the past of the Internet, marking its strikingly fast adoption and assessing its impact on American users’ lives. This report is part of an effort by the Pew Research Center’s Internet Project in association with Elon University’s Imagining the Internet Center to look at the future of the Internet, the Web, and other digital activities. This is the first of eight reports based on a canvassing of hundreds of experts about the future of such things as privacy, cybersecurity, the “Internet of things,” and net neutrality. In this case we asked experts to make their own predictions about the state of digital life by the year 2025. We will also explore some of the economic change driven by the spectacular progress that made digital tools faster and cheaper. And we will report on whether Americans feel the explosion of digital information coursing through their lives has helped them be better informed and make better decisions.

I don’t disagree with any of it but for me these appear to miss the marco-economics of Policy, Banking, Funds, currency, citizenship, Jobs, employment and stuff that affects our daily lives.

1) Information sharing over the Internet will be so effortlessly interwoven into daily life that it will become invisible, flowing like electricity, often through machine intermediaries.

2) The spread of the Internet will enhance global connectivity that fosters more planetary relationships and less ignorance.

3) The Internet of Things, artificial intelligence, and big data will make people more aware of their world and their own behavior.

4) Augmented reality and wearable devices will be implemented to monitor and give quick feedback on daily life, especially tied to personal health.

5) Political awareness and action will be facilitated and more peaceful change and public uprisings like the Arab Spring will emerge.

6) The spread of the ‘Ubernet’ will diminish the meaning of borders, and new ‘nations’ of those with shared interests may emerge and exist beyond the capacity of current nation-states to control.

7) The Internet will become ‘the Internets’ as access, systems, and principles are renegotiated.

8) An Internet-enabled revolution in education will spread more opportunities, with less money spent on real estate and teachers.

9) Dangerous divides between haves and have-nots may expand, resulting in resentment and possible violence.

10) Abuses and abusers will ‘evolve and scale.’ Human nature isn’t changing; there’s laziness, bullying, stalking, stupidity, pornography, dirty tricks, crime, and those who practice them have new capacity to make life miserable for others.

11) Pressured by these changes, governments and corporations will try to assert power — and at times succeed — as they invoke security and cultural norms.

12) People will continue — sometimes grudgingly — to make tradeoffs favoring convenience and perceived immediate gains over privacy; and privacy will be something only the upscale will enjoy.

13) Humans and their current organizations may not respond quickly enough to challenges presented by complex networks.

14) Most people are not yet noticing the profound changes today’s communications networks are already bringing about; these networks will be even more disruptive in the future.

15) Foresight and accurate predictions can make a difference; ‘The best way to predict the future is to invent it.’