Whilst our universe is full of hostile places, and they are engaging in their own right, I want to unpack the thinking and use naturally occurring hostile environments as an analogy to help unpack complex decision making in hostile to non-hostile work environments.

I enjoyed reading Anti-Fragile in 2013; it is the book about things that gain from disorder by Nassim Nicholas Taleb. "Some things benefit from shocks; they thrive and grow when exposed to volatility, randomness, disorder, and stressors and love adventure, risk, and uncertainty. Yet, in spite of the ubiquity of the phenomenon, there is no word for the exact opposite of fragile. Let us call it antifragile. Antifragility is beyond resilience or robustness. The resilient resists shocks and stays the same; the antifragile gets better." When writing this, I have the same problem looking for a direct opposite of a Hostile Environment, as in an extreme ecosystem (ecology),  and whilst I have opted for a non-hostile environment, anti-hostile would be better.

In nature, a hostile or extreme environment is a habitat characterised by harsh environmental conditions, beyond the optimal range for the development of humans, for example, pH 2 or 11, −20°C or 113°C, saturating salt concentrations, high radiation, 200 bars of pressure, among others.  These hostile places are super interesting because life is possible, and it is from what life emerged. I will extend the thinking and use this as an analogy to help unpack complex decision making by comparing hostile to non-hostile, extreme to amicable.

Time apparently moves more slowly than in a non-hostile environment than in a hostile environment.  Time, in this case, is about the period between change.  Change in a hostile environment is challenging and has to be done in tiny steps over a long period of time. Rapid change increases the risk of death and non-survival.   To survive in a hostile environment, the living thing needs stability and resilience.  The processes (chemistry) methods (biology) must be finely adjusted to become incredibly efficient and effective - efficacy matters. Change is incremental and very slow.  To survive, sharing is a better option; having facts (data) matters, you survive together, and there are few paradoxes. Of note is that hostile environments will become less hostile. As it moved from an acidic creation to our current diversity, the earth is worthy of note.

In a non-hostile environment, time can move fast between iteration/ adaptation.  The risk of a change leading to death is lower as the environment is tolerant of change.   The jumps can be more significant with fewer threats.  Because the environment has a wide tolerance, it is less sensitive to risk (5 sigma deviation is acceptable); therefore, you can have large scale automation, programmable algorithms and less finely tuned processes, methods and rules.  Innovation and change will come thick and fast as the environment is amiable and amicable.  The time between this innovation and adaptation is fast.   The environment creates more volatility, uncertainty, complexity and ambiguity.   Politics and power focus on control over survival.  The world is full of paradoxes.  Non-hostile environments will become more hostile.

Yes, there are problems will all analogies, and this one breaks down; however, there is a principle here worth thinking about.  In hostile environments, there are fewer paradoxes.   I would argue that this is because survival is one driving purpose.  Survival is one of the four-opposing purposes in the peak-paradox model.    In non-hostile environments, you can optimise for more than one thing.  Indeed you can have many purposes all competing.  This leads to many paradoxes.   In work environments where senior leadership is unable to comprehend paradoxes, I also observe hostile environments (different to natural ones but just as toxic).  Where I find teams that embrace VUCA, innovation, change and can see the paradoxes in their data, facts and knowledge;  observe congenial, amenable, non-hostile and anti-hostile environments.

The key here is not this observation but about direction.  Knowing which camp you are in is essential, but so too is knowing the direction. How to measure Peak-Hostility is going to be another post. Non-hostile places tend to become more hostile because of politics and power dynamics; dealing with paradoxes is hard work.  Because they demand working together and clarity of purpose, hostile environments can become less hostile.

If we plot this thinking on the Peak Pardox framework, I believe it will be difficult to escape the dynamics of Peak Human Purpose (survival) until scarcity is resolved.  At Peak Individual Purpose, the few will control, but this creates a hostile environment for the majority.  Peak Work, we observe fierce competition between the two camps, where hostile can win by focussing on costs, but non-hostile wins through innovation.  At Peak Society Purpose - there is something unique as non-hostile could lead to anti-hostile. 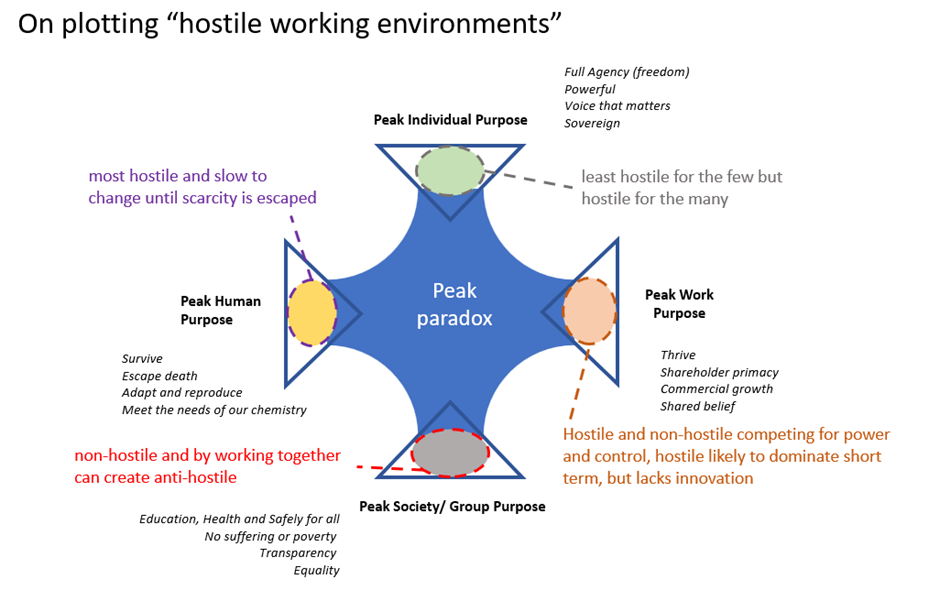 As to decision-making, what becomes critical is whether your decision-making processes match your (hostile/ non-hostile) environment and direction, as they demand very different approaches.  Hostile, in many ways, is more straightforward as there is a much more defined purpose to which decisions can be aligned.  Non-hostile introduce paradoxes, optimisation and complexity into the processes with many interested stakeholders.  If there is a mismatch in methods, this can be destructive—much more to think about.