December 16, 2020
The Tytler cycle of history provides an exciting context for thinking about the struggle between belief and power and where next. 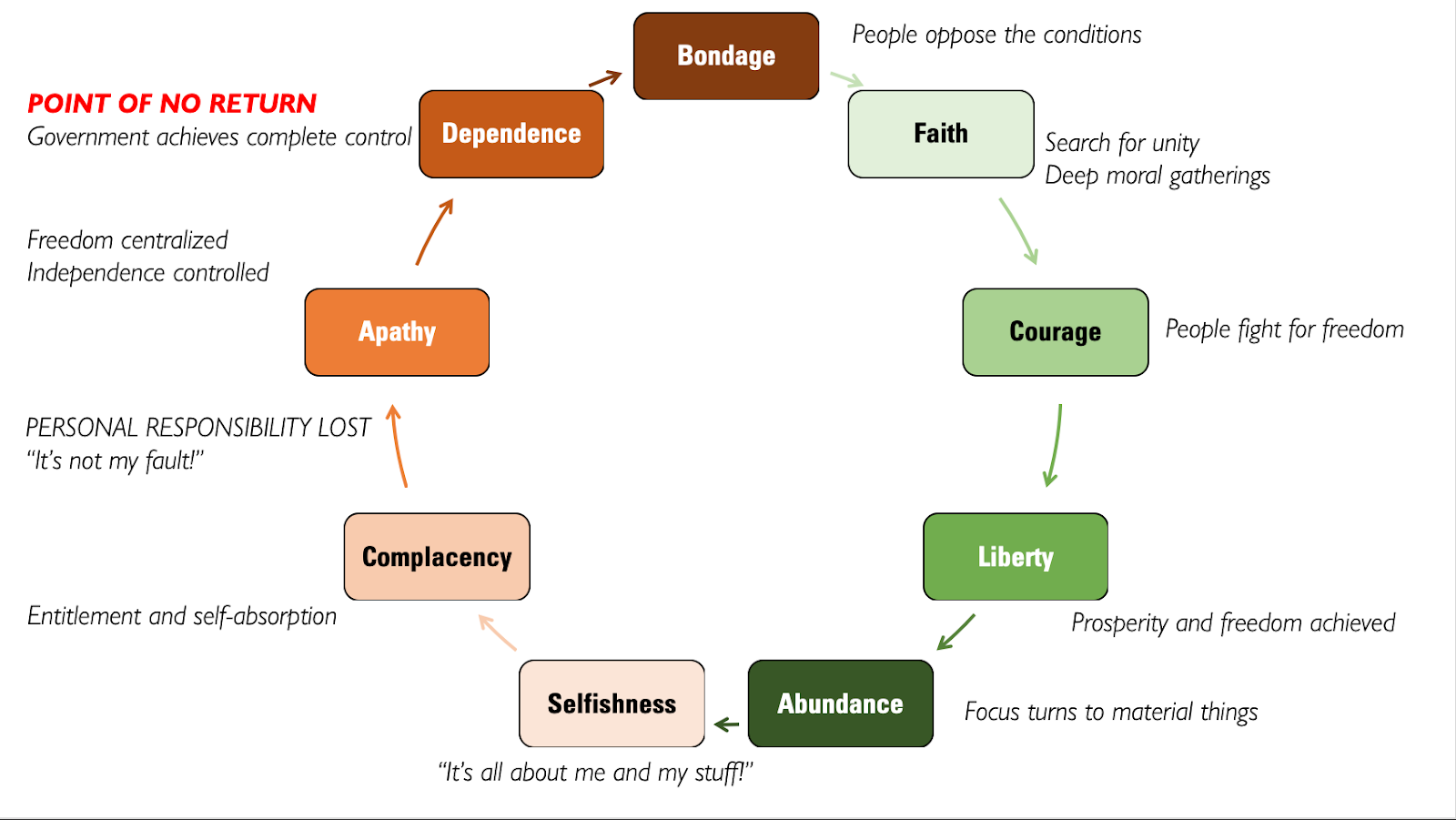 We are using this to considering the macroeconomics of where we are right now going into 2021. I am taking a view for North America and Eurozone.  This viewpoint is certainly not valid for the Middle East, Africa, South America, Russia and most of Asia.  I would love to read the same commentary from some in those regions.

The observation is, where are we in the Tytler cycle?  I would propose for North America and Eurozone we are spread from liberty (the 1950 baby boomers) and dependence (massive increase in numbers due to COVID19 who are now dependent on a state.)   The majority in our society are in the Selfishness, (I am an individual and have rights) and Complacency  (my tiny footprint can only have a small impact on the climate and I cannot make a difference on the global stage).  Whilst liberty was c.1800’s and Abundance was c.1950 they are still very much prevalent in thinking due to education, societies structure and social class movements. 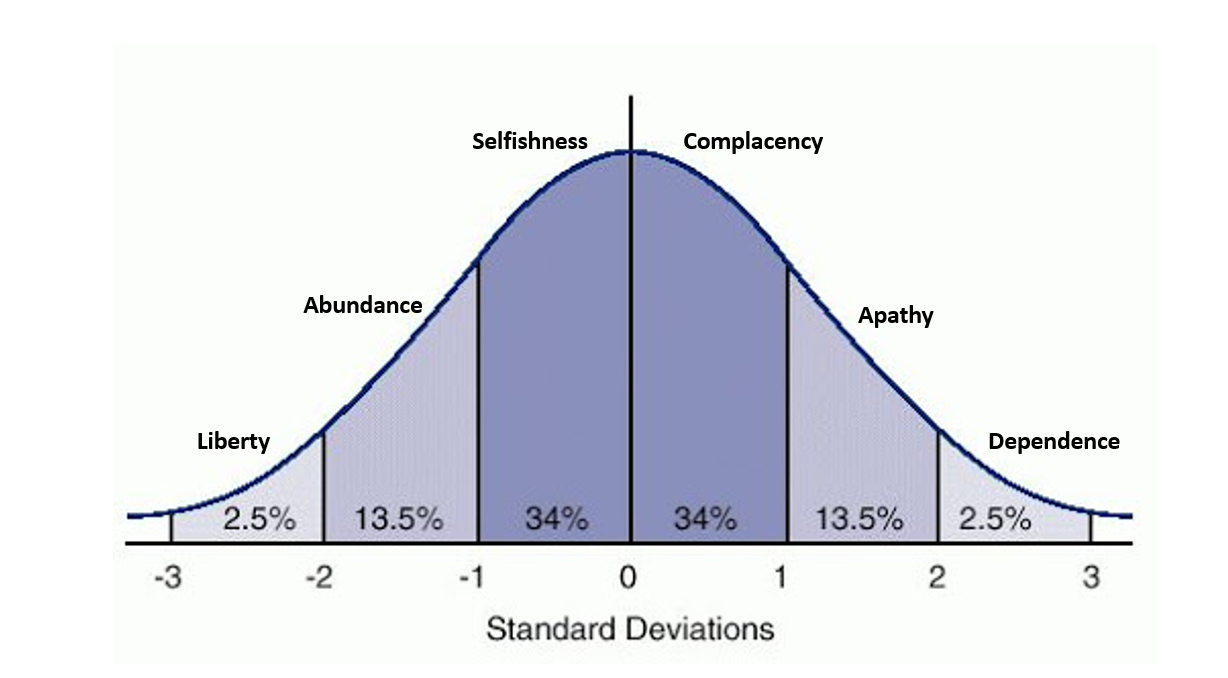 The context for me is where next for automation and decision making towards #AI.  I love the Arther C Clarke quote that “Any sufficiently advanced technology is indistinguishable from magic.” I sense that the majority of us in NA and Euro are in the selfishness and complacency - which means we believe that I the individuals rights trump societies broader rights.  “I will not give up my freedoms that others have fought and died for!”  Power and agency are resting with the individual.

I have created below a circular tussle between belief and power as they dominate thinking as times change.  AI is on route to being magic, which might close this long historic cycle as we start again. 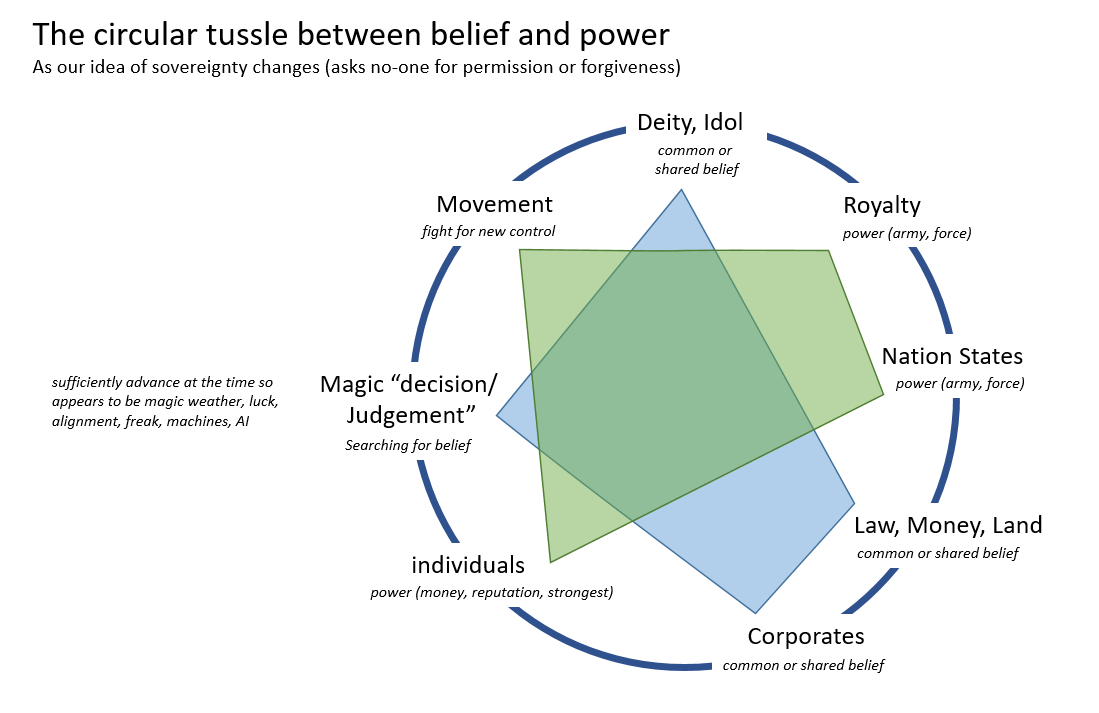 Belief, in this example, is where society has a common on a shared belief in something and that this deity, idol common belief cannot exist without a shared belief.  Power, in this case, is in the vacuum of belief someone/ something can use belief as a tool to gain power and keep control using power.

History has taught us that shared beliefs give power to royalty (consider influencers, celebrities conspiracy or take a belief to enable control) from which nation-states can rise as they wrestle with too much power resting in so few.  From the vacuum emerges new shared beliefs. Note: a shared belief being that it will not exist without everyone believing (money, law, companies).  Individuals come to gain individual powers from this shared belief system.  Humanity seeks out purpose and finds a way for a complex judgment to be made, and thereby creating a way for something else to be held accountable for the randomness of the outcome.  And so we repeat.

Where we stand, because of COVID19, there will be a negotiation between citizens and their government as governments have stepped into maintaining economic activity and survival.  The negotiation between citizens and government will be a barter for rights, freedoms, power, control and sovereignty.  #BREXIT puts in an interesting spin on it.  We might not like the idea of bondage in the 21st century, but since many nation-states will have a view that its citizens owed it something for stepping in - we should call it for what it is, you might prefer tax.

Taking a breath for a second.  Right now, we are focussed on more productivity and more efficiency, which is centring on more automation.  The “future of work” is a much-debated topic due to the known increase in automation.  We are starting to ask ourselves who gave permission to the automated processes, does it ask for forgiveness when it goes wrong and who is responsible for explaining what our love for automation is doing.   We are automating both internal and ecosystem dependent processes.  This is fast taking us from algorithm automation to machine learning automation to Artificial Intelligence controlling systems that may become sovereign.

When the context of the cycle of power and belief is combined with  #AI, it creates an interesting dynamic.  We are about to head into for the next 20 to 30 years, and the emergence of a new movement to create a new shared belief.  Are we about to outsource complex decisions on climate to a new shared belief, that says the hardship is worth suffering for the common good?